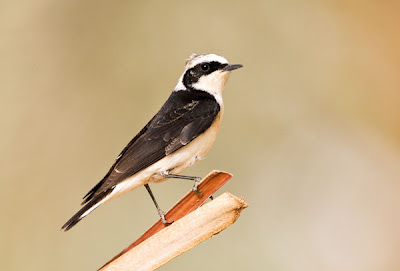 On our last full day in Israël Arjan van Egmond and I decided to check the palmtrees around KM20, north of Eilat, for Dead Sea Sparrow. A species we hadn't find so far during our week stay. On arrival we split up and I checked all the rows in the plantage if there were sparrows feeding on the ground.
Not a single bird until I came across a Wheatear species standing 100+ meters inside the plantage, facing forward. It striked me as odd right away as it was all pale at it underparts, no black throath and breast, but it didn't look good for the usual suspect Black-eared Wheatear, as it had a black line connected with its black wings.

At that point it turned and, facing the other way and showing its upperparts, I was looking a 100% (Cyprus) Pied Wheatear.... But that species had a black throath and breast... It turned again and there was my prove that i was not hallucinating - its underparts where all pale. Remembering that there was a 'morph' called vittata that was suposed to have these features i looked around to find out where Arjan was. Where is he when you need him? (and his telescope!).

Arjan was standing 150 meters away, waving his hand - he had found Dead Sea Sparrow... darn. A quick run to the place where he was standing revealed a empty bush, the sparrows where gone.

I updated Arjan what I had seen and we rushed back, with the telescope, to the place where I had left the Wheatear alone. Gone of course, so we split up again checking the rows for the bird. After a few minuted Arjan relocated the bird and could be seen in the same few as a 'normal' Pied type Wheatear. This looked good!

As we had now idea how rare this bird was, we decided to call back-up. I called some Dutch Birders around and Arjan called a local birder, Yoav Perlman whom we met during a Nubian Nightjar excursion. His words coming through the phone where quite clear: "Marc is not allowed to leave the area until he has photographed the bird, it is a first for Israël!"
According to Hadoram Shirihai the Vittata Pied Wheatear is at least a subspieces and not a mere morph.

I needed no further encouragement, despite the wire fence, and I went in where the bird performed very well in the end. 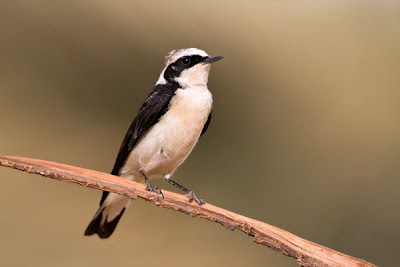 A new bird for Israël on our last day - a perfect ending to a perfect birding week! More about the birds of Eilat soon.
Gepost door Marc Guyt op 08:22 Geen opmerkingen:

A shot for seeing Northern light saw me and my dad arriving last week at Oulu airport. We had decided just 10 days earlier and soon we were off for a long weekend Northern Finland. Besides the Northern light there we more treasures hidden in the snow covered Taiga forest: Owls, Grouses, Golden Eagles, Jays, Tits & Dippers. 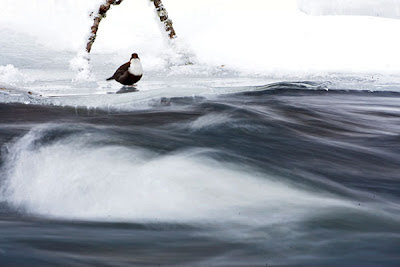 A White-throated Dipper in the dark


Arrangements where made through the company Finnature (www.finnature.fi), owned by AGAMI photographer Jari Peltomaki, and he had lined up some good memories.

First morning saw us outside a resort checking the trees around the building. A huge male Capercaillie had taken residence as well in the spa and used the trees around the resort as his diner table. Soon we had found the bird and waited untill it flew down to the ground where it perfomed subperb and amazingly unconcerened by all the attention. Despite the dull weather we had a great time and was able to get some shots worth keeping from the encounter. 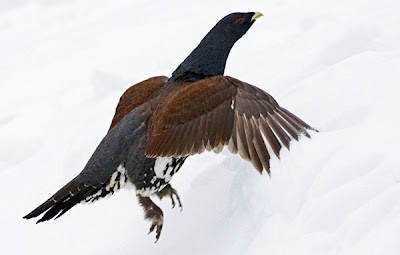 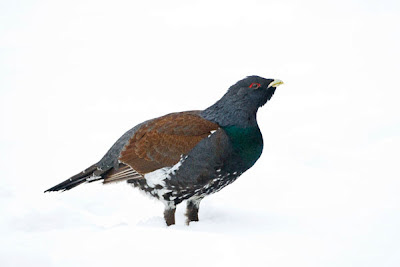 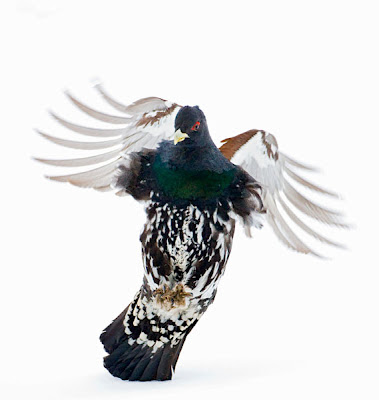 Next morning we woke up in all white Kuusamo, a smallish city next to the Russian border surrounded by prestine Taiga forest, fairytail like due to the exteme snow conditions. What a beautiful place!

Here we ware taken in the hands of Olli, and soon we were off for our Owl quest. A majastic drive followed with snow/frost covered forest in all directions. Black Grouse, three Capercaillies and 25 Pine Grosbeaks where nice finds but one of our targets didn't gave in. Untill we received a phonecall that a bird was found and that is was cooperative! A 45 minute tense drive followed, we stopped and soon the bird was spotted it a tree trop. The mouse went out and within 1 minute a superb Hawk Owl grabbed the mouse just meters in front of us. A perfomance he repeated 6-7 more times. A superb bird in a superb setting! 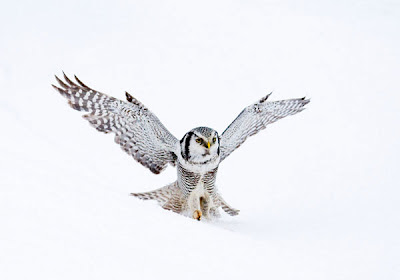 
Last full day was Eagle day. We drove to a hill north of Kuusamo where we went up on a Snowscooter. After a while we came upon a small clearing where some hides where dugged in. In front of hides two places had bait for Golden Eagle and besides, on the feeders just in front of the hide birds as Woodpeckers, Jays and Tits performed well. 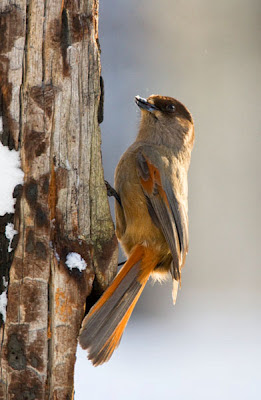 The plan for the day is simple: get in the hide, dress yourself warm (including sleeping bags covering your legs), put your lens outside the hide through a small pane, turn up the heather, photograph the woodpeckers, Jays and Tits untill a shadow appears. Then freeze, slowly select one of the baits and wait till the shadow drops on the ground. Wait a while then slowly start shooting, after 5 minutes the eagle is not weary anymore and you can do everything what you want again.

After an hour the female appears and then you have to be carefull again untill she has landed. Very simpel and a very humbling experience to be in such close quarters withe thea eagles for such a long period. And that includes the setting of the snow covered Taiga! 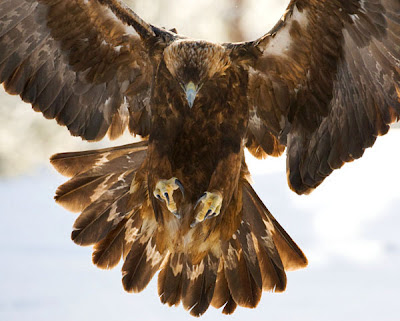 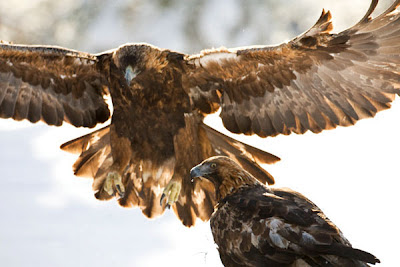 And the Northern light? Alas, we did not see it. Sun was not active at the moment we had clear skies. The evening we left Jari did photograph a nice display above Oulu area - we could have seen it from our Hotel balcony. Next time! I'll be back!
Gepost door Marc Guyt op 14:50 Geen opmerkingen: